Presenting Data and Information: Thoughts from a Day with Edward Tufte

If you’re not familiar with Edward Tufte, he may be the preeminent voice on data visualization and presentation. Assuming you haven’t already, find a friend or co-worker with some of his books (or buy them yourself). Whatever you think of his teachings, I think it’s hard to deny that the man has an eye for design and produces beautiful publications.

Last week, Emily, Mike, and I had the opportunity to spend the day at an “ET” session: “Presenting Data and Information.” We thought it would be fun to each take a short crack at what our key takeaway was from that day.

“So what?” I asked myself after hearing Tufte talk. He offered a lot of great observations and insights, but so what? No offense, Mr. Tufte, we ask this a lot at Think Brownstone. And clients engage us to help them answer their “so what’s.” Here’s one of the whats that came out of my so whating of his talk.

We spent a good deal of time looking at visual explanations of things, like: the evolution of rock, Napoleon’s 1812 march through Russia, and the origination of the SARS outbreak. Each of these represents an effective model for presenting complex information clearly and building understanding around an issue. Which is great, but…so what? The content is set in stone, fait accompli. Once I understand what it is conveying, the fun’s over.

If you’re putting all this rich data in front of me, I want more. I want to get my hands dirty and interact with it. I want to be able to pull it apart and mess with the variables, to run alternate scenarios and learn from them. What if there had been three fewer days below -20 degrees during Napoelon’s march? What if the Beatles never formed? You’ve given me what is, now let me play with what isn’t and learn from that too. In a digital world we expect more. Models need to become tools. Audience needs to also be manipulator. The marriage of data interaction with design can vastly magnify the “so what’s” asked and answered by a single data visualization, and that, my friends, is exciting stuff. 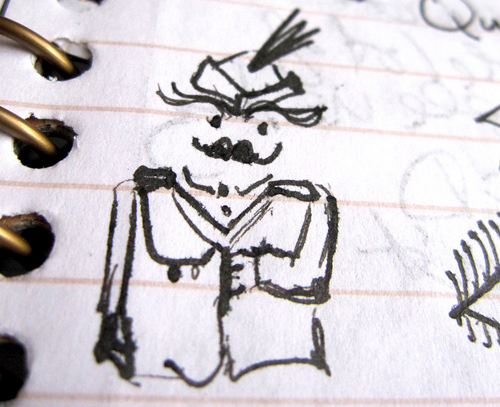 I can see why Tufte uses so many examples of older charts and figures, from a time before people were concerned about projector resolutions and PowerPoint functions. There is much to be said for rendering figures entirely by hand and not having to limit yourself because of print margins or the price of glossy paper. Myself being an aggressive doodler, I was tickled by the fact that when Galileo wanted to show people what Saturn looked like through his telescope, he just drew it right there in line with his notes! With as much as I draw, I still feel a need to keep my notes and my drawings separate, as if they’re two different things. I think that stems from the fact that when I think, I tend to think about things as I would do them on a computer. If I’m taking notes, I open a word processor. If I’m drawing, I open up a graphics program. The two things become separated not because they are fundamentally different (in fact, with the way my brain works, they tend to perfectly complement each other), but because the methods that I use to create each thing don’t get along well with each other.

Tufte made the point that whenever the methods of information transfer are separated (i.e. color vs black/white printing), the quality suffers. One of the examples he gave was books that had color inserts in the middle of them. Not only do the full color pages feel different then the others (they’re heavier), they’re stuck in the middle of the book and far away from any of their context. All of that leads to an awkward experience and a compromised information transfer. Integration is the key. So if you can’t fit your image onto a PowerPoint slide and keep it legible, it’s entirely possible that PowerPoint isn’t the tool you should be using. 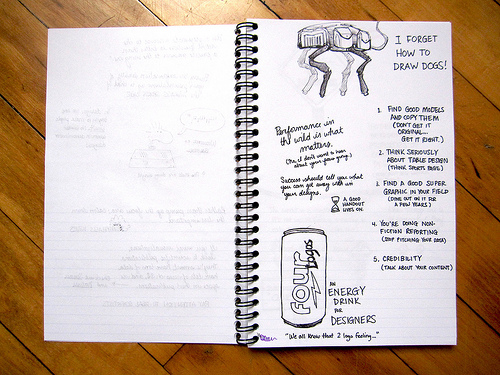 Nobody is going to question Edward Tufte when it comes to data visualization; he’s not only written the book on the subject, he’s done it four times over, each taking a different (and successful) tack on the larger issue. I was therefore somewhat surprised that he spent what seemed like such an inordinate amount of time during our one-day session extolling the virtues of “sparklines,” a miniature form of data visualization that he claims to have invented. The self-promotion and adulation was obvious and if nothing else, left an impression.

I suppose that’s why it came back to me several days later as I reflected on the death of Steve Jobs, another famous self-promoter. Steve got a lot of flack from haters about the “reality distortion field” and how he created a cult of personality that tricked people into paying more for Apple products. But I will tell you as a design professional, what he created was no trick. He sold the hell out of it, but without the products to back his claims, Apple wouldn’t have pulled out of their mid-90’s death spiral. I’m betting that Tufte’s claims will be borne out as well, as you can already see on Google Finance (look at “Related companies”) and Google Analytics pages.

Ultimately, though, it doesn’t really matter to me whether the sparkline tangent was warranted or not. What seems more important is the pattern of success Mr. Tufte managed to (unwittingly?) illustrate with it:

I know which one I’m not interested in. I’ll get back to you in about 30 years and let you know which of the other two I picked. Thanks, ET. 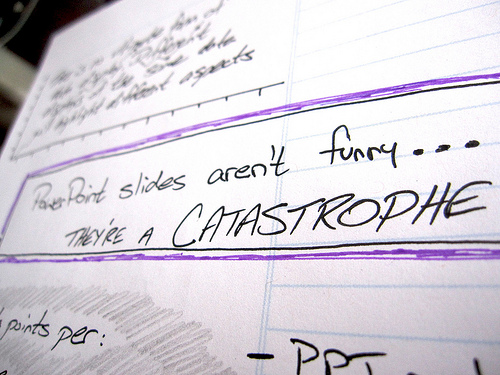