In May of 2000, my dad was in a sudden car accident that took his life. I was living in South Jersey at the time and happened to be practicing with my band an hour away from my apartment. I didn’t yet own a cell phone, so I didn’t get the message until many hours after the fact. When I finally did, I put together a quick “go bag”, threw it in the back seat along with my suit, and drove the 2.5 hours back to Long Island in stunned silence.

I forget the details as to why, but along the way I got into some kind of altercation with one of the toll booth operators (didn’t have E-ZPass yet either), and he was being particularly tough for some reason; really laying into me. I remember, even at the time, feeling sorry for him… and thinking, “man, if he knew my deal right now, I bet he’d feel like crap.”

Since then, not always but often, if somebody does something crazy on the road for instance, I’ll stop myself from immediately reacting and think “the hospital is right up the street—are they rushing to get there because they’re about to have a baby or someone has been seriously hurt?” Of course that is likely the exception and not the rule, and it’s hard (and probably a little counterproductive) to err on the side of the exception… but if you think back on those times when you were really devastated, and remember the people who vibrated sympathetically with you in one way or another… wow, it really means something and sticks with you. Empathy. There’s that word again.

“Frankstenstorm” was a funny (but not really) way to talk about it before it actually hit, but we weren’t laughing the morning after. I’ve been re-dedicating myself to our Twitter feed as of late and start most mornings looking for cool/relevant stuff to spread via that channel. On October 29th I had a few things lined up but every time I was about to hit “Tweet” I just couldn’t. It didn’t feel right. Then I saw this brief comment (and subsequent conversation) from Whitney Hess fly by: 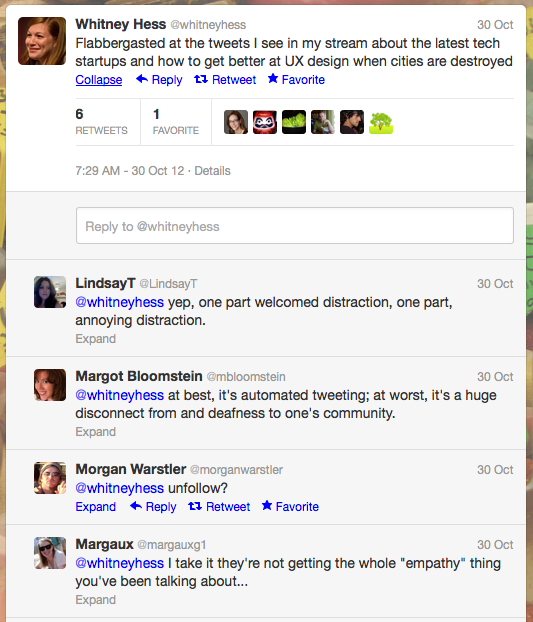 This immediately struck a chord with me because I was feeling the same way.

As a brief aside, to put this post together I had to dig back through Whitney’s Twitter feed to find that exchange. I didn’t take a screen capture when I first saw it, but it stayed lodged in my brain. What she did to keep people connected in the wake of the storm was nothing short of heroic. I am humbled and inspired by how she used Twitter in the aftermath, and I personally haven’t ever seen a more selfless display in my feed. I know that she didn’t do it for recognition like this, but she deserves it. Follow her, go back and see what she has been up to for the past week, and marvel. Whitney, you’re awesome.

Anyway, I ended up sending an email to the rest of the Think crew saying “hey, I know we said we were going to amp up the social media feeds but… you’re going to see a lull for the rest of the week. If it’s not something about helping people through the storm or examples of empathy in the midst of all of this, I don’t think we should do it. Maybe more to the point, I’m not personally in the headspace to do it.” That was met with resounding agreement, but of course we also talked about what it means to operate that way all the time.

Empathy all the time?

What we’ve been banging on is this idea that on any day at any time, individuals or small groups of individuals can be going through some really heavy stuff. How do you account for that? We’re no strangers to designing with that kind of empathy guiding us because we have a lot of clients in the healthcare space and speaking from experience, some of our in-depth research with target populations has left me unable to speak. But you just can’t function in the world if you’re bearing all of that weight on your shoulders at all times, and taking more and more of it on… it’ll grind you to a halt, and it’ll do the same for your business.  The modus operandi there is to establish an acceptable baseline of civil dialogue and interaction that will work for the folks in those situations as well as those who aren’t, and strive to maintain it. This sounds obvious enough but requires diligence to enact, particularly when you’re in a field like ours (design) with a high snark & snipe quotient.

But there are other times when major things happen to large populations of people and it may require a more direct and specific response. It’s still kinda shocking how most of us went about our days, business-as-usual, during the 2004 tsunami. We were aware that it was an apocalypse on the other side of the world, but… it was on the other side of the world, and we did have our business to tend to. Many of us made mention of it to some degree, but that disaster may or may not have hit an area where our friends/families/clients/customers were. On the one hand that’s not acceptable, but on the other, you can kinda “get it.”

With our headquarters just outside of Philly, Hurricane Sandy hit us at home. It was a time to quickly assess what we were saying as individuals and as a business and decide the most appropriate response. This won’t be the last time we have to do that. We witnessed some ham-fisted stuff going on this time around, and we’re not calling out anyone in particular… but we are redoubling a plea for empathy. It’s good for us as a human community, and it’s good for our businesses that are powered and patronized by that community.

There’s another reason why Sandy kinda stopped me in my tracks. You read up there that I’m from Long Island. My nuclear family moved away and I’m down in Philly now, but pretty much everyone else on both sides still lives there. My hometown for the school year was West Islip, but in the 1910’s my great grandparents started visiting Roxbury, Breezy Point by ferry, bought a bungalow there a few years later, and my extended family spent most of their summers there for the next 80 years (I did until 1993). Many of my family and friends still do. My heart aches for what they’re going through up there and if you’ve read this far I implore you to watch this video and donate if you can. They need our help. It’s really, really bad up there, and we simply cannot in good faith get back to “business-as-usual” yet. Maybe our businesses have to… but not us as individuals.

BTW—we talked about this post a lot during the editorial process and I got some really interesting and valid feedback from other folks here. I asked them to add their thoughts as comments, if you’re interested in reading further and joining the conversation.