Vote the “Attack Ad” Out of Office

It’s that scary time of year again…but I’m not referring to the ghouls and goblins that came knocking over the weekend. I’m talking about the time of year when our airwaves are overrun with negative political ads telling us how awful the “other” guy (or gal) is. Research has shown that negative ads are only viewed positively by those who already supported the ad’s sponsor, so they’re essentially preaching to the choir. The corollary to this is that it’s ruining the political experience for the vast majority of us who disagree with the use of these negative ads.

We’ve seen a lot of brands duke it out before our eyes over the years: Coke vs. Pepsi, Windows vs. Mac, Ford vs. Chevy, Adidas vs. Puma, and I’m sure you could name dozens more. These companies have billions of dollars tied up in their brands, yet look at the type of ads they’ve been producing; they’re tongue-in-cheek at worst and downright celebratory of their rivalries at best. Granted, they aren’t in a winner-take-all competition like politicians, but the argument could be made that their overall market share has more of a direct and obvious impact on the general population once you consider their employees, shareholders, and consumers.

So why aren’t these corporate behemoths saturating our airwaves with their own attack ads telling us how athletes wearing Pumas saw their incidence of twisted ankles increase by 21% or how Pepsi is environmentally irresponsible because their cola is more belch-inducing, thus generating more greenhouse gases? The easy answer is because it’s illegal. The Federal Trade Commission polices all advertising and requires ads to be truthful, non-deceptive, and fair. They also require producers to back up their claims with data. However, I think the more complex answer (and this applies especially to the big brands I referenced earlier) is that companies learned a long time ago that negative advertising is a turnoff. Buying a car is painful enough as it is. The last thing an auto company wants is you to even remotely associate their brand with grainy pics of their rival’s “unsafe” cars accompanied by ominous music. They want you thinking about their car ripping up a scenic drive or playing happy with the flowers. Big brands know the experience they want to create for their customers. They know their likes, dislikes, turn-ons, and turn-offs. They know how many buttons you have, what they do, and when to press each one.

If the corporations and ad agencies have got this button-pushing down to a science, why haven’t the politicians? The simple answer is they don’t have to. There is no “truth in advertising” law for political ads (quite the opposite, in fact) and there’s really no incentive for them to change their behavior. In a winner-take-all competition where the populace is so evenly split, you don’t have to win anybody over, just fire up your existing supporters enough so they bother to vote.

I don’t know about you, but my client list would likely shrink pretty rapidly if they heard my plan was to infuriate 49% of their audience so that we satisfy the other 51%. From the Experience Designer’s perspective, the modern political ad is a massive fail. Obviously this isn’t a new complaint, but considering the alternative (acceptance, apathy) let’s discuss a few potential improvements.

Designate an agreed independent arbiter/coordinator (like Philadelphia’s Committee of Seventy) for each race and air only ads approved by this coordinator. This group may dictate the topics for discussion or just vet the ads. Alternatively, the coordinator may select three to five key questions pertinent to the race and ads could take the form of each candidate responding to the questions with candidates submitting their own questions as well. This takes the form of an asynchronous debate in short form.

Currently, all candidates must declare their support for the ads they sponsor. This is a good first step, but could be enhanced. Again, make use of an approved independent arbiter to review all claims and briefly address their validity. Scores/results could be presented quickly at the end of each ad or posted to a website advertised throughout the ad. There are numerous “fact checking” organizations (with varying allegiances) already doing this to some extent, we just need to tie them more directly to the ads themselves.

For good or for ill, Americans tend to chafe at regulation. Also, because of the cyclical nature of elections, there’s little down side in candidates annoying their constituents for short periods of time. Both of these issues make it difficult to legislate the negative ad into history and mostly guarantee that politicians will keep using negative ads as long as they’re not being hurt by them. Because of the nature of our electoral system, withholding your vote is not only ineffective, it’s antithetical to the idea of a representative democracy. But what if all frustrated voters banded together and vowed to vote for the least-negative politician, regardless of party? (Let’s assume a certain level of competence for this hypothetical situation – Big Bird probably wouldn’t run any negative ads, but I’m not sure I’d trust him running the country.) 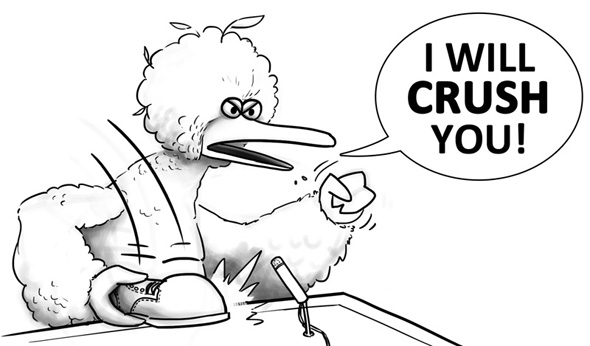 Voter turnout for Presidential elections in the past 30 years has hovered around 50% (and around 30% for “off year” elections). One would imagine a sizable portion of the non-voting public is checking out due to apathy. Mobilizing these people (even 1% would be over 2 million votes) would result in a powerful voting bloc to incentivize candidates. One tight election swung by this bloc of “honor” voters could easily be the catalyst to make future elections a contest to one-up the other guy and run the more civilized campaign.

History certainly shows that negative campaigning has been with us for a long time. I would imagine folks have been complaining about it for  about equally as long. I certainly don’t expect one blog post to solve the issue, but as Experience Designers, we are practitioners in a fairly new field that could have far-reaching impacts. Let’s apply our unique skill sets to more non-traditional settings and see what happens. You don’t know until you try.