How many times have you heard a key stakeholder for a digital initiative throw out a broad statement like “we need to include some social media in this”?

“Well Duh” Statement #1: Many folks who say these kinds of things can’t really quantify what they mean or what the value proposition might be.

“Well Duh” Statement #2: Many folks who say these kinds of things do so in the same manner that they might say “what the heck, let’s super size it too” or “can we throw some racing stripes on there? That’d be cool, right?” Obviously, they don’t get that there’s a whole discipline of business strategy emerging around the phenomenon. It’s not nearly as simple as “turning it on”, especially because with social media there’s not only the potential for great uptake vs. no uptake, but also for self-destruction. You need to curate and shape your social presence, not just “set it and forget it”.

If social media is good for your business, it’s good for you. It is not good enough to read articles about how social media is influencing the business landscape and to know some of the buzzwords. If you don’t have accounts in the various types of outlets and you’re not actively using them, then no, you don’t get it. Period.

I’m not saying that all executives should be engaging in social media on behalf of their brand, per se (though when done right, there are benefits to be derived). But they should be engaging at least on their own, and here’s why—if you’re not in the thick of it, you simply can’t understand the dynamics of the interaction, the manner in which things trend, the way news breaks, the way brands are made or destroyed, and the real dynamics behind things like crowd-sourcing and cyber-bullying (of people, brands, or otherwise). That’s important because, “duh” again, if you’re a decision-maker for initiatives that may have social components, you need to be familiar with how these things work in order to effectively manage, direct, and lead in this space. 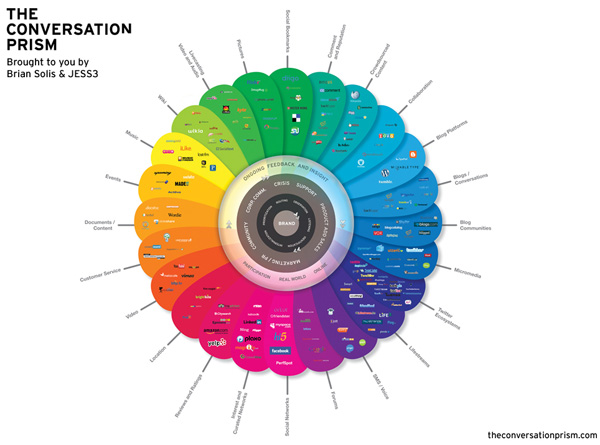 But, let’s put some parameters around this too—you should be familiar with the different flavors of social media, but being everywhere (see The Conversation Prism diagram) would be impossible even if it was your full time job. The key is to be informed and participate in a qualified subset and to leave opinions and preconceptions about those channels at the door. It’s OK if you “don’t get why it’s so popular”, but it’s not OK to let that be an excuse for avoiding it. That’s the same as a 1940’s advertising executive saying, “this TV thing is a fad, newspapers aren’t going away—that’s where we should be focusing our business.”

The good news is that getting up to speed is free—it just requires some of your time and dedication. What it all boils down to is that you can’t effectively answer the question “how can we harness social media?” until you’ve answered “how can I?”