Seductive, Noble, or Both? Design & The Pride of Purpose

Before I joined Think, I was very seriously considering a drastic career change away from design – something I had at that point been doing for ten years. I wasn’t sure exactly what my next step would be, but I started taking classes to potentially switch over to education full time (I’d been an adjunct graduate professor for 10+ years), I was curious about health food franchises, and was even considering military/law enforcement opportunities—basically, whatever I thought would be the opposite of sitting in a cubicle all day.

At the time I attributed it mainly to feeling out of step with corporate culture and environments, and wanting to do something “real” and “meaningful”. I admired people in fields like healthcare, where they could see the very concrete and direct impact of their efforts in the lives of others. It shocks me now that I couldn’t see that potential in my own work, but frankly, design had never really been positioned that way to me – not overtly by educators and/or colleagues, and not at all by organizations where I worked. 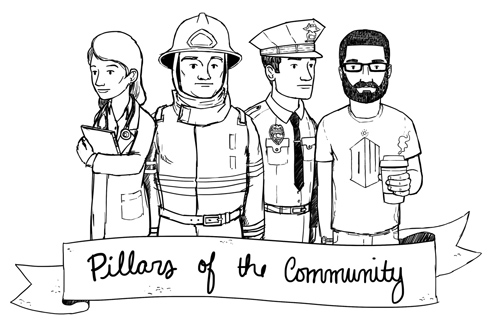 It was only when I mentioned my struggle to Carl (we were, serendipitously, having lunch at Tony & Joe’s Pizza in Conshohocken, directly below what would become our first Think Space less than a year later) that things started to come into focus… as we talked about the idea we had kicked around in years past and that he and Brian were about to make a reality—a company dedicated to making people’s lives better through design. Was that an original statement? Probably not, especially when aimed at general consumers/customers… but we were also talking about those poor souls slugging it out in cubicles every day.

See, there’s the “seductive” design work being done by (here we go again) Apple, Google, blah-dee-blah. And I tell clients all the time that we are certainly fans of orgs like these, and perpetual students of cutting edge design techniques and technologies. But while we certainly get a kick out of the high-profile public-facing design work (ahem, we are designers after all), we get equal if not more buzz from putting the same care and attention into designing experiences for internal-facing, B2B, or niche applications/products/processes, because those are the ones that have typically been neglected from a usability and aesthetic standpoint.

You want to make a difference in someone’s life? Give that cubicle-dweller (a living, breathing, design-consuming individual with an iPhone, Netflix, and Mint.com account) a tool that helps them do their job more efficiently, intuitively, and enjoyably. Employ the latest conventions that they’re encountering everywhere else in their life, and banish those Windows ’98 looking interfaces FOR-EV-ER. I kid you not, our work in this arena has actually elicited tears of joy in the past from the target audience.

I can’t even tell you what an overwhelming pride of purpose there is in that. Without question, we’re making people’s lives better. Even if we eliminate just some of the infinite little frustrations we face every day at the hands of ill-designed interactions and reclaim some of that wasted time… that’s a valiant pursuit. But for you skeptics looking only at the bottom line? Reclaimed time, previously squandered, now ripe to be put toward productive use. That’s ROI, baby!