Recently, a blog post about a Yelp comment gone wrong circulated through the office. Despite being fictitious, this isn’t something to be written off. One doesn’t have to look far to find legitimate instances of social media blowback in our real-world lives.

What does this mean? Do we, as social media participants, need to craft all our posts to the lowest/most-agreeable common denominator, avoiding any possibility of offense (or individuality)? After all, it’s becoming a given that your online activity will be examined fairly early in the courting process, whether by a potential employer or partner. Or, will society mature, acknowledge the merging of personal and public, and evaluate people as a whole; on both their skillset and ability to conduct themselves as appropriate given the setting? If you put any stock in this CareerBuilder survey, it seems like Corporate America is at least a few years away from such an enlightened stance (and if you ask me, that’s being generous), so either get editing or get ready to defend your life.

While I like Kit Eaton’s take on the CareerBuilder survey and issue in general, I feel like he’s missing a fourth option: let it all hang out. Being a reader of this blog, I’m going to assume you’re an intelligent, well-rounded, and high-performing individual who contributes a lot to their organization and/or clients. Employers are lucky to have you and clients want to work with you. Do you think their opinions would change if they found your mullet-adorned, beer-swilling college photo? What about last week’s salty tweet about Mel’s, ahem…opinionated…voicemails? If so, maybe that fit wasn’t as good as you thought. However, if truly putting yourself out there means posting stuff that would turn off even the most open-minded of us, maybe you need to reexamine your life. 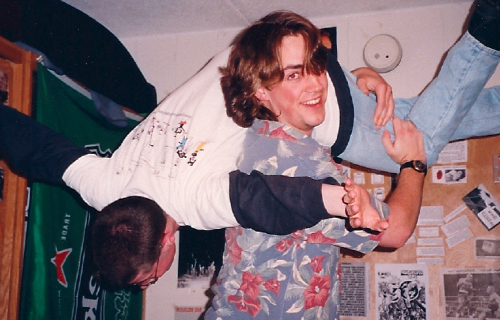 That’s a tough stand to take in such tenuous economic times, but do you really think this whole social media thing is a fad? Me neither. So let’s be the ones to jump in with both feet and show the way. If we’re to do that, there’s definitely some reorienting of expectations needed by all players.

Users: Expect everything you post will be discovered. By everyone. Forever.
Employers: Learn and embrace the new sharing. Focus on the whole person and their ability to be a professional in professional situations.
Parents/Educators: Orient your charges to the impact/permanence of online posts. Help give them the perspective they inherently lack.
Creators: Manage participation, but don’t suppress opposition. Use your power to build communities.

Nobody’s going to argue that Mark Zuckerberg and Facebook sure have some things to learn in the PR department. And while what the Facebook creator said in January about privacy no longer being a social norm could have been phrased a bit better, I think the idea behind it is right on. People are sharing more and more of their private lives online for the world to see and despite threats to the contrary, nobody’s leaving because of privacy controls (especially Phil). We like the idea of privacy, but when push comes to shove, we’re pot-committed to our social media lives even if we’re not ready to admit it.