An Overlooked Enemy of Good Design

Today I did something I don’t get to do very often: I turned off my email. Aside from three pre-scheduled check-ins to make sure nothing was melting down, I was off-line almost the entire day and able to focus on a single design assignment. Toward the end of the day I reviewed my work with the client to collect their feedback and tomorrow we’ll start the review process with other stakeholders.

It later struck me that eight consecutive hours of focus is a rare thing. In this case I was making significant changes to two months worth of work due to a very wise decision made by a very wise executive. That is not sarcasm – a good decision was made, and to be successful we needed to take three steps back in order to take four steps forward. It was refreshing to do this kind of rework and feel like I was “doing the right thing” rather than diluting something as a result of design-by-committee.

I’m a huge fan of theoatmeal.com, but when Matt Inman vents over idiot clients or copycat design methods, I feel like he’s missing the point. In my experience, one of the greatest enemies of good design isn’t what we typically blame: clients, technology, time, money, or even nepotism. I’m calling out the turf war. 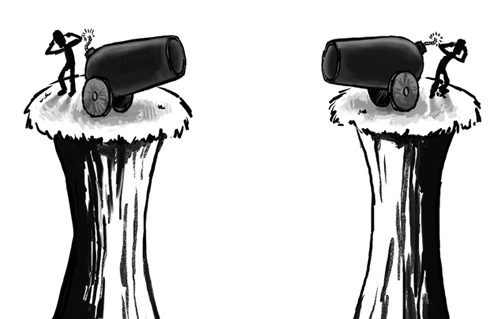 We do a lot of work with pharmaceutical companies and much of my efforts focus on helping clients communicate important information to physicians, nurses, and pharmacists. I’m not talking about your typical marketing site for a new drug, but the volumes of clinical information that pharma companies provide to the medical community free of charge and without any marketing messaging. This information gives your healthcare providers the data they need to make informed decisions and, without question, it saves lives. The sad fact is that the medical industry doesn’t always trust information coming from “Big Pharma.” There are a lot of reasons that have contributed to this situation over the years. The pharma industry has been spending a lot of energy trying to remedy the situation, but fixing trust issues is a hard game.

I can’t meet physicians without grilling them about how they use technology in their practice. A while ago I ended up sitting next to an ER doc at a baseball game. We got to talking and I asked him about the electronic medical record systems at his hospital. I was not surprised by what I heard, but it’s a great example of how turf wars are the enemy: a series of battles between medical departments, vendors, healthcare systems, and their IT departments leaves many ERs with multiple systems. Sometimes they have multiple screens up for one patient: charts, radiology, labs, research, etc. Many of these systems don’t talk to each other because they’re built by competitors who want to dominate the market. None of these decisions were made to improve usability or achieve better patient outcomes; they were all made to “protect” someone’s group, market share, or position.

So…back to my entire day of focus: the reason why that’s so rare is due to the unfortunate reality that in my typical day, much of my time (and I suspect yours) is dedicated to dealing with the fallout from turf wars. Over time, those successful in these wars become unable to function any other way – they default to tactics of offense or defense. The wisest don’t contribute to the wars. Fueling that fire means you’re not doing what you do best: focusing on good design. Less time spent on design means less time collaborating with your friends and colleagues over in Content, Development, IT, and Testing. It also means missed opportunities reaching out to users and stakeholders for critical feedback. 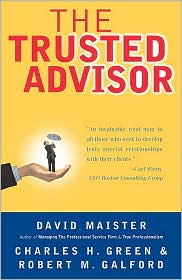 David Maister wrote a book called “The Trusted Advisor” that every UX designer should read. Much of the book is dedicated to trust building. You don’t build trust by getting sucked into the turf war, you build it by doing the right thing.