It has been nearly a year since I penned my original rant about Doomsdayers and Nay-sayers terrified about Facebook wanting to own their content. As many predicted, FB changed their entire business model and made a fortune selling all of those riveting lunch updates and pictures of sleeping cats. My guess is they’ll probably pull all ads from their site soon because the revenue they’ll make on all of that inanity is worth much more than the targeted ad revenue they could make off of a community of 350Million+ users.

I fittingly put my feelings about this issue in my FB status last month. It was so funny, four of my friends copied it to their status… I practically went viral, yo:

Attention People: time to panic. As of forever, things you put up on the internet may be available for people to see on the internet. This is a clear violation of your privacy on this completely voluntary system. To disable this, go to your start button and choose “Shut Down.”

Most of the rumbling calmed down once FB instituted a series of messages and annoying dialogue boxes to warn you that this meme isn’t 100% true. Then Zuckerberg opened his yap again and some chicken littles kept venting about it. Essentially, FB is allowing Search Engines to crawl the profile information that YOU determine is part of your public profile.

Many aren’t taking issue with the fact that FB has done this, they just take issue with the fact that the default settings made more of your information public than the average user would like. Novice users are probably completely in the dark. These points make sense, and are much less alarmist than the folks who are using the social networking site they (theoretically) despise to terrify the masses. 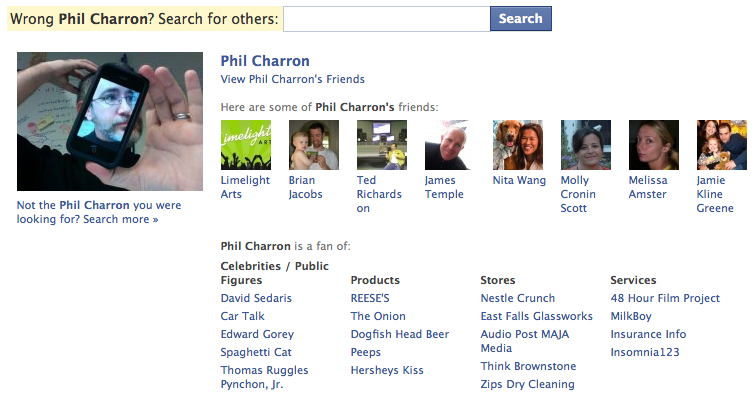 For me, I stand by my original thoughts: FB is a business. FB is enjoying tremendous growth. The more users, the more money there is to make. The last thing FB wants to do is make decisions that will cause them to go the way of MySpace. FB even reacts appropriately when they make a decision and forgot to consider the viral reactions of some alarmists. However, when they made the decision in 2007 to create PUBLIC profiles and recently to open them to PUBLIC search engines, it wasn’t part of some Orwellian plan to make a few bucks or deceive their users. Their thought process probably went something like this:

FB1: You know what – if an old friend of yours isn’t on FB and they’re looking for you, they can’t find you.

FB2: Well, they can search for your public profile through FB…

FB1: But wouldn’t it be better if they Googled your name and found a link to your public profile in the results? I mean, it’s a public profile, and that way they may join FB to become your friend.

FB2: Hey, good idea… it would certainly increase our organic search placement. Let’s get on that!

So, what’s the lesson here? It’s not really the privacy issue as much as it is the way FB approached the change. Somehow they have to work into their updates a communication plan to explain exactly what changes they are implementing and why. They need to get into the heads of the alarmists and defuse the bomb before it goes off. They need to be proactive rather than reactive. That’s a tough order when they’re probably making hundreds of minor changes regularly…which ones are the alarmists going to pick?

Or they could follow the path they’ve been walking and lose the folks who are terrified of Big Brother lurking in the darkness. What does FB care, though? Those people only cause trouble and the noise doesn’t seem to be impacting their market share… yet.