UXD and The Implications of Self-Service

Looking back, I’m able to remember some of the interactions in my life that came across as particularly novel as the shift toward customer self-service accelerated, starting in the late 70’s and early 80’s but really catching fire in the decades that followed.

For me, one of those would be using an “Automated Teller Machine” for the first time. 24/7 access to cash and all I needed was a card and a PIN; it was truly magical. Still, some folks were apprehensive about those machines—some fearing that they wouldn’t receive the correct amount of money, and some simply not understanding exactly how the machines interfaced with their accounts. Years have passed, and most of those trust issues have been ironed out; today only the most stubborn banker still avoids ATMs.

I became aware of another early instance as I began managing my own utilities accounts: phone trees. Calling the airline, the phone company, the electric company… being directed through endless sub-categories only to reach an “answering machine” or be disconnected… terrible, hair-pulling experiences that haven’t improved much in 20+ years.

What prompted this shift?

Folks probably knew for a long time that a great way for companies to cut costs would be to outsource client and professional services to the customers themselves, but it became a lot more practical as new types of technology started becoming available. What may have seemed like a radical concept at the time is now ubiquitous. In fact, we’re so used to it that it only becomes obvious to us when it doesn’t work, and we really need some insightful help that is nowhere to be found.

I thought the image below was extremely telling of our collective response to the concept of outsourcing services to end-consumers (click to see in its full glory): 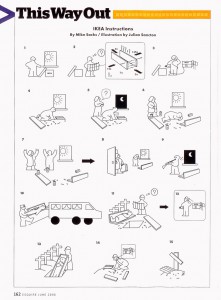 For the most part, IKEA does an excellent job creating a customer self-service model that works. However, what the illustration cleverly points out is that there can be a heavy burden placed on the customer when previously in-sourced roles and services (in this case, furniture assembly) are placed in the hands of the uneducated consumer without a full set of tools (clear instructions) to bridge the gap.

What does this example have to do with customer experience?

More than you might think. If we go back to ATMs and phone trees, and think about all of the additional things outsourced to customers (those who don’t wish to pay a premium to continue to “have it done for them”) since, the list is lengthy – here are just a few:

Of course, the list will continue to grow, and will someday encompass areas we would today never consider a category for self service such as professional medical services, or university education (although those areas are already using self-service in some respects).

Why should we care?

Well, last week I was at the grocery store checking out with my milk and eggs preparing for the impending nor’easter, and this is what I encountered: 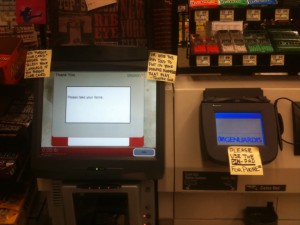 The direct correlation on the web is that more and more applications and services are being placed in the hands of end-customers, and I fear that companies of all types are largely unprepared to fully understand and translate the needs of those customers into applications that are easy to use, intuitive and fully functional.  I suspect the “virtual post-it notes” will continue to grow in size as firms struggle with the onslaught of customer frustration they will unwittingly generate under the guise of “making it easier for customers to help themselves”.

Don’t get me wrong, customer self-service can be a great thing for companies and customers alike. Do you remember how things used to be before the ATM? Trying to get to the bank before it closed (or risk being without cash for the entire weekend)? Being forced to wait in line for a simple transaction, behind folks with all manner of requests (large and small) and all degrees of financial (and social) aptitude? Who would want to go back there? And why should banks pay tellers to preside over the kinds of basic, repetitive transactions that can be handled by ATMs? The efficiency gained and amount of money saved that goes directly to the bottom line is astronomical.

Once again, it’s about allowing innovative ideas like customer self-service to truly flourish by applying design thinking to their deployment. It’s about reducing the cognitive burden on users, providing the full set of tools necessary for interacting via the selected channel, and being honest about where the line should be drawn: sometimes the best solution will still require human interaction at some point. This in no way constitutes failure—after all, the goal is not simply to put as much of the process on the customers as possible, it is to drive them to completed transactions (satisfaction) as intuitively and efficiently as possible.