When attacking a design challenge, gathering business requirements is equally important to gathering user requirements—and it’s a critical part of our process to ensure that we keep those two things in balance.

There’s plenty of precedent for what happens when you err too far in favor of either. But you must also understand that a brick wall doesn’t separate these sets of requirements from one another. They inextricably live in the same ecosystem, impacting and influencing one another. Too often we see folks with the blinders strapped so tight that they’re not only failing to see the bigger picture, they’re simply making bad business decisions that can haunt them for years to come.

Recently I had the unpleasant experience of canceling my cable/TV/internet service at a provider with whom I’ve been a steady customer for over 15 years, to go to their primary competitor. This happened despite my proactively reaching out twice to give them the opportunity to keep my business, explaining that I understood their position and business drivers, and was even willing to pay a little bit more than the price the competitor was offering for the same package to avoid the hassle of the conversion – but not 50% more, which was what I had been bumped to. They said they couldn’t do that, even though it meant therefore getting $0/mo from me, and so I left. Promptly, I began receiving promotional offers in the mail from said company asking me to come back for a rate lower than I had previously been paying. That, my friends, is one tightly integrated business. Are we as customers expected to be anything other than frustrated, or feeling like we’re dealing with a faceless, lumbering doofus of a corporation? 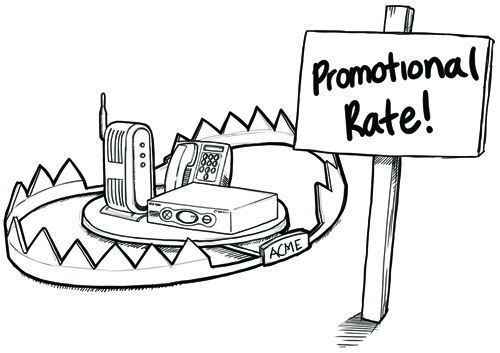 Now listen, I know how this game is played. Of course I switched for a “promotional rate”, so at some point in the future I’ll probably be dealing with this at the new company too. But, by locking in for two years… at least I have 24 months of effortless, predictable billing at a reasonable price. Still, it did get me thinking about it from an experience design perspective.

I can’t help but feeling that when my rate for a service is suddenly bumped up without warning, the company doing it to me is assuming that there’s a good chance I’ll miss it (at least for a few lucrative months) or better yet, I’ll be too lazy to question it or do anything about it. That’s because a shockingly high percentage of the time, that’s true. The system is purposely designed to capitalize on our apathy and already complicated and hard-to-monitor monthly finances (seriously, click that link – Harry Brignull’s thoughts & presentations on these “Dark Patterns” are brilliant).

Essentially, in all service industries rates have to rise over time—that’s the nature of the beast. But how you deal with it, and the experience you design for your customers, is where the differentiator lies.

Battling with a service provider every 6 months. Doing that courtship dance with the “retention specialist” who has the magic wand to keep your rate the same (but only sometimes deigns to use it). Getting things resolved but knowing without question it’s only temporary. Watching statements with an eagle eye to be ready for the next skirmish. Knowing friends who have the exact same services but pay completely different rates because they were a little better at complaining/negotiating. Is that really the experience you want people to have with your brand?

Couldn’t an honest, predictable, non-negotiable, non-expiring rate be provided? You may argue that it’s more complicated than that. Maybe on your side of the fence it is, but I have news for you: your customers don’t care. I am a person that will pay for good experiences, expertise, and convenience. But I’m not stupid, and I’ll go elsewhere when I feel I’m not being treated respectfully or getting appropriate value for my money. I’m not alone.

And speaking of expecting apathy? Requiring users to purchase yearly subscriptions and having them automatically renew unless they go in and turn that option off? Not being super clear about that fact? Making it a really counter-intuitive process to change this setting or get reimbursed once you’re charged again for a service you forgot about? Again, this is design specifically meant to trick people, no two ways about it. I know, because I’ve been asked to design this way in the past. I won’t. Wanna know why?

Customers who want to leave will find a way

We may be apathetic sometimes, but just because it’s really difficult to quit or downgrade service does not mean that once a user has it in their head to do it, they’ll eventually just think “screw it, this is too hard… whatever”. On the contrary, they will now pick up the phone and call you (what, you don’t publish your number online?) which is exactly what your website/app was intended to curtail in the first place. What’s more, what you’re effectively doing by making this final interaction with your company a painful one is to ensure it will be the final interaction. People switch service providers often. They work with different contractors depending on the project. When they choose not to go with you, if you give them a smile, a handshake, and validate their parking on the way out, you’ll remain on their list of options next go-around and they may even have second thoughts. But too often it’s an unpleasant exchange, cold bureaucracy, and a kick down the stairs.

Am I saying that you have to make it easy for people to leave your service? Yes, I am. It’s a potential user workflow and one that should be as supported and intuitive as any other one, because it’s a critical junction for demonstrating character and, perhaps counterintuitively, strengthening the long-term relationship you have with customers. Of course, the trick is to make it so they won’t ever want to initiate this workflow (or initiate it again).

Do you want customers to pay you more every month? Absolutely you do. But you can choose to make this happen by providing additional value that they’re willing to pay for, making them feel that they’re getting something for the additional spend, and that it correlates with what they’re seeing elsewhere and what they feel the market will bear. Or you can raise your rates after “promotional periods” expire, and have 20 minute wait queues on your help lines at all times.

Can you make a big chunk of money by designing for apathy and confusion? Yes, I won’t deny that you can. I hope that becomes more difficult as people become more savvy and organizations are more focused on true customer service and satisfaction. But until that day, you as a designer and/or business decision-maker have to look at yourself in the mirror.

How to take action? Well, for starters, if you require a squadron of “retention specialists” to offset your customer service operation… you may want to ask yourself why?
Filed Under: Rules Of Thumb
Share this post: