My parents did a fine job raising their children – five kids, and not a felon among us. Not yet, anyway.

In my opinion they made only one critical error in judgment. This error will haunt them for the rest of their lives – mostly because I refuse to stop bringing it up. Sometime in the late 1970’s, my parents gave me a massive set of LOC BLOCs. What? You have no idea what a LOC BLOC is? Nobody did. All the cool kids had Legos. I was a Pariah. 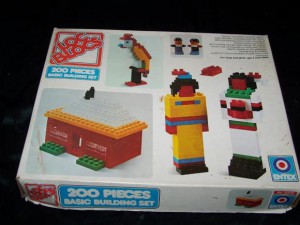 My father cited that the LOC BLOC set was ‘close enough.’ My mother noted that we got a lot more LOC BLOCs than Legos for the money. That’s all fine, but as the Wikipedia article states:

The blocks were of a very similar grid pattern to the Lego system, but not quite. The knobs were too tall and spaced just a little bit off. The result was that children who owned the much cheaper LOC BLOCs were often excluded from group play with other children who owned the overpriced, but more popular, Lego bricks. – (wikipedia, 2/12/2009)

Anyway, where am I going with this? Well, the feeling I had when I first tried to attach my LOC BLOC rocket ship to my neighbor’s Lego space station is the same feeling of disappointment that I experience when I encounter app-like interfaces on the web only to learn that they only look like apps – they don’t act like them. For example, behold the “Pictures of the Week” interface on time.com: 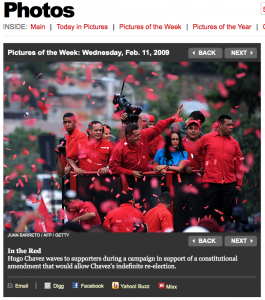 When I encounter what looks like a photo flipper with dedicated “Back” and “Next” buttons – I expect the items within the frame to update when I click a button. In the example above, the entire page refreshes. This was acceptable in 1998, but today, clicking on that “Next” button and watching the whole page refresh just feels like someone went for the cheaper, “close enough” version. Why pretend to be something you’re not? At the very least, simple text links outside of the image frame might have deterred me from thinking I would be interacting with a self-contained app.

I understand that there are business reasons for not wanting an actual image flipper on your site. Page refreshes provide those much-desired view counts advertisers want. Just don’t trick me into thinking I won’t have to sit through an entire refresh when I click your button. Apps are becoming more and more ubiquitous, and even casual users now have expectations regarding the style and speed with which they react. Be what you are, not a wolf in sheep’s clothing. Or, a LOC BLOC in the Lego pile.

UPDATE: there is hope out there. Some traditional print media outlets are exploring actual app behaviors in their interfaces – such as the New York Times’ Article Skimmer Prototype. Now, if I can only resist the temptation to rob a toy store for a set of Legos, maybe I’ll make my Mom proud and run for public office.