An Event Apart Gets It

There’s only so much money/time one can allocate to attending conferences. When your skills and interests overlap several fields, the available choices can be daunting—and deciding which ones are worthy of investment can be a real head-scratcher.

This is especially true since in my experience, every one I’ve attended has either ultimately been a (sometimes thinly veiled) sales pitch or otherwise so poorly planned and managed that I’ve often come away feeling swindled.

This is why it’s so nice to finally have a conference recommendation that comes with no caveats: An Event Apart (AEA), from the same great folks who bring you A List Apart (required reading).

This past week I was lucky enough to attend the “show” with Carl and Brian out in Seattle, and thought it would be nice to write about it from the User (Attendee) Experience standpoint—and about why An Event Apart GETS IT. 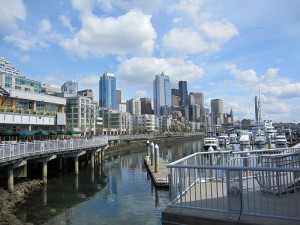 One of the things I dread about conferences (especially those with any sort of technical or design component) is that for whatever reason, the vibe often tends to be competitive, elitist, and condescending. In turn, this breeds all kinds of unsavory behavior from the participants who, their feathers ruffled, actively snipe at the presenters (and each other) on Twitter and other mediums, the whole thing feeling like a skirmish and making you contemplate a career change when it’s all over.

An Event Apart was so refreshingly different that I was actually a little shocked. All of the tweets were positive and constructive, and the snark-factor was conspicuously absent. The room was jam-packed with talent from around the world, and the mood was collegial, convivial, and downright pleasant (owing also, I must say, to the fabulous soundtrack hand-picked by founder Jeffrey Zeldman). It felt like a movement to collectively increase quality and aesthetic value in our work rather than a few individuals flexing—in other words, a hand reaching down to help you up rather than a muddy boot in the face.

A lot of this is due to the fabulous selection of speakers, which can be seen here, all at the top of their game, and willing to share their tricks of the trade freely, humbly, and with deft delivery that sometimes verged on stand-up comedy. It was highly entertaining, and these folks were also approachable and accessible; all genuinely nice people who were happy to kick back a few at the happy hour as well. 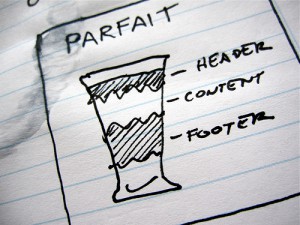 See, smart people understand that there’s more than enough work out there for all of us—and if you know what you’re doing, you’ll get your share. They also know what Paul Arden tells us: “Do not covet your ideas. Give away everything you know, and more will come back to you.”

And, for what it’s worth, what my great grandmother used to say: “you catch more flies with honey than you do with vinegar.”

Plenty of others have gone into detail about the content each speaker presented, so I’ll just say it was all solid, professional, and there were more than a few “things that make you go hmm…” that I know I’ll be considering as I push forward. But what I appreciated most was the breadth of content; it wasn’t all code, it wasn’t all design, and it wasn’t all strategy. Instead, it bridged the gaps between the various disciplines and took great pains to point out where the dependencies lie and the pitfalls of not paying attention to them.

For a bunch of folks from pretty varied backgrounds, the agenda was still mighty coherent, and added up to a sum greater than its parts. Personally, even though I’m not much more than a tinkerer when it comes to code, there were still ideas in Eric Meyer’s CSS sessions that made me seriously think about how I design interfaces, and I was glad that people like Kristina Halvorson (I think 9/10 of the room walked out of there with a new professional crush on her) were putting eloquent structure to things that I think about often. 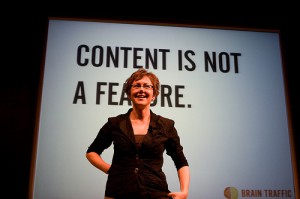 If your interests and skills lie in a few different areas, you might feel that attending a conference focusing on any one of them would mean consciously neglecting the others—AEA provides a well rounded sampler that goes deep into special topics in several disciplines that are specific to some and useful to all.

So many conferences have several “tracks” and breakout sessions, which I think results in more anxiety than anything else.

“Did I pick the right one?”
“Oh crap, this one sucks… I should have gone to that other session!”
“This session overlaps with the other one I’m interested in, I’ll never be able to make both of them…”

Wisely, AEA goes light on the quantity and high on the quality, with one solid track on the main stage that is rightfully called “the show”. Tightly and respectfully time-managed, not only does this adhere to “Don’t Make Me Think”, but it exposes attendees to ideas from other disciplines they can use in their own work that they might not otherwise experience if they were only chasing down things they thought were 100% relevant to their skill set. Again, this is part of the point of AEA.

This also has the added side effect of making the group itself a bit more coherent—it feels like more of a shared experience, even for just the two days (which, BTW, is the perfect length). Therefore, at lunch, it isn’t a lot of “nice to meet you, what session were you at?” but instead it’s a lot of “woah, Ethan Marcotte’s visual presentation was fantastic, right? We’ve got to do more of that…” and “I’m picking up Luke Wroblewski’s book right now—we run up against that stuff with clients all the time.” 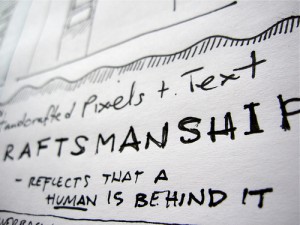 Hats off to you, AEA. We came because we heard great things about you (and because we’re old pals with Greg Hoy from Happy Cog, and we know he wouldn’t hang his nametag just any ol’ place), but we stayed for the little minty malted milk balls. Oh, and because you KILL IT.