Alcatraz Island Gets It

One of the things I wasn’t able to do the last time I was in San Francisco, which everyone always said was essential, was take the Alcatraz Island tour.

Due to a disconnect between where our Frommer’s guide said to catch the ferry and where it actually was (every trip we go on with one of those books, we always find ourselves in at least one or two jams based on incorrect information), the day started off a bit rocky. After a nice jog over to the correct pier, we stood in line for the ferry and it was then, sweaty and panting, that we started to look around and get concerned. 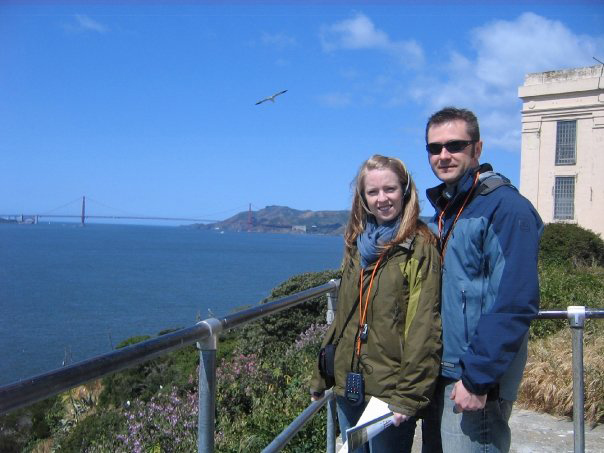 If you’ve ever done the trip, you know that you need to get tickets in advance – they’re rarely available for walk-ons (we had purchased them a few days before over the phone – and even that is only possible in the “off-season”). Boats leave approximately every half hour for the duration of the day, and they are PACKED with people. For someone who is not a fan of big crowds (well, being in them, anyway), I watched our boat fill up to the gills and thought about all of the other boats that were over there already… and all of the boats that would arrive after us… I wasn’t optimistic about the impending experience on that tiny island (with a good portion of it not even accessible to visitors). We decided to suck it up and hope for the best.

This is where it gets good. When we arrived, there was a large group waiting in line to take our ferry back to the mainland. Although the process for loading and unloading passengers was orderly and efficient, I still didn’t have a lot of hope for what awaited us inside the prison. When you actually get inside, you wait on a single-file line to get your audio tour. This sounds worse than it is; you wind through exhibits with plenty to look at and can grab some great introductory reading material, so it goes by pretty quickly even though there are a lot of people moving through. Also, I’ve been to a lot of museums abroad and have always been relieved to see audio tours and directions in English – I’ve thought about how rare it is to see multilingual accommodations in the U.S., and thought that the amount of supported languages on the signage and in the audio tours was downright neighborly.

Now, the audio tour is not “optional” – you don’t have to pay extra for it (I have always felt that these things should be included in the price of admission – it’s unfair to make patrons choose whether or not they want to spend the money for additional information and context…the instructional designer in me just cringes at that). You also don’t have to use it, but when you look around, everyone who is seems to be enthralled and knows exactly where they’re going, so that’s a strong incentive. Without it, the experience would be seriously diminished.

First off, the audio tour is extremely well done – real commentary by former prisoners and guards, and kept to nice bite-size chunks that aren’t too high-level or so detailed that you’re thinking “oh, come ON…” (quite the opposite of the audio tour at St. Vitus Cathedral in Prague). But here’s where it gets brilliant. Whoever designed the tour put a LOT of thought into it, in terms of how the audio would guide users through the prison and be timed perfectly to give them a personal experience while also being able to maximize the amount of people that could be there at a given time. It’s fairly linear but it is still user driven – you can start/stop it when you choose and replay certain sections if you like. When you’re finished you really feel you’ve “done it” all, and from there you can explore on your own although you don’t feel like you need to see anything else indoors – at that point it is more about exploring the rest of the island on your own. In contrast, at St. Vitus I didn’t know where to go next, had no concept of how long it would take me to be able to see “it all”, kept running into people as they milled about willy-nilly, and had to wade through a lot of superfluous detail to find out what I was actually looking at most of the time.

Even though there were literally many hundreds of other people on the island with us, it never felt like a crowd because movement was deftly facilitated by the tour. Again, I’m not suggesting that it was a passive, zombie-like experience – we moved around and past some people, skipped some things, and some people skipped past us. So, you could be as constructivist as you wanted to if you were so inclined, but if you wanted some structure and direction (which we were grateful for), it was there – and most people tended to avail themselves of it. As a result, even though I figured there was going to be an inevitable crush of people at some point along the way, when we got to the exercise yard, we were able to be out there all by ourselves – the picture below proves it…I was really stunned. 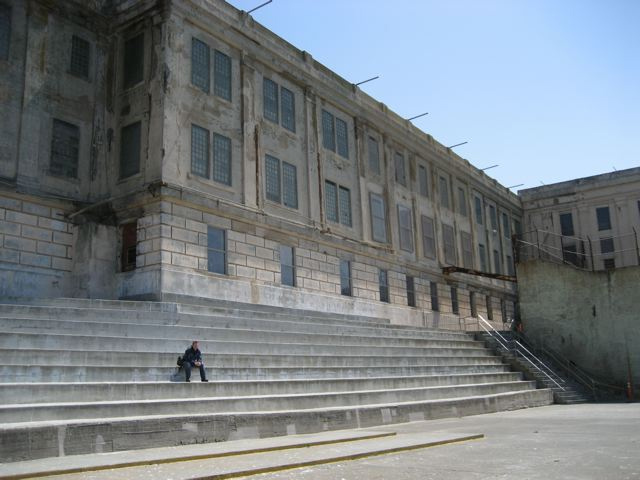 This experience was no accident. It was obviously very carefully designed, and I was grateful for the attention to detail and the smart planning that went into it. The fact that we were able to enjoy a quiet contemplative walk around the perimeter of the island after the guided tour amazed me even more.

When we got back to Philadelphia, we went to check out Eastern State Penitentiary – which also has a great, and similar, audio tour (narrated by Steve Buscemi, no less). Eastern State is a more solemn and introspective tour when you’re there (unless it’s around Halloween)…and sometimes that is indeed what you want. I’m not sure that I would have wanted this type of structure in the audio tour at the Barnes Foundation Gallery. But for the sheer volume they’re able to move and keep the experience intact, Alcatraz gets a gold star.